Chronos - A Tapestry of Time 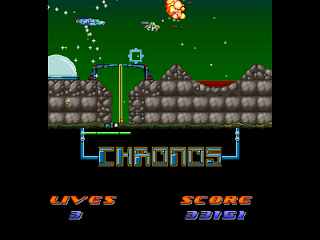 Remake of an old ZX Spectrum shoot em up from 1987 by Mastertronic, and my entry for the Retro Remakes 2006 Competition (placed 9th of 76).

In the beginning when the universe was new, the Seven Ruling Lords did create their own races, and so Wodan created Man and Chronos created the Mystical Dimension Weavers, a powerful race of high intellect and integrity - or so it was thought.....

No one could have forseen how ambitious and treacherous the weavers would become and how they would scheme and plot against Chronos until they day came when they made their move and entrapped the helpless Chronos beyond the realms of existence as we know it, in another time dimesion. In desperation the remaining Lords sent forth their champions to defeat the Weavers and release the incarcerated Chronos.

This however has nothing to do with you, as the game is about firing groups of 8 consecutive pixels at much higher conglomerate groups of pixels in the hope of amassing a memorable score.

Note: This game is Freeware and is supplied as is - the author bears no responsibility for any issues that may arise from running this software.